The most famous landmark of SMA is a towering pink neo-gothic church called the Parroquia.

The most charming city in Mexico is San Miguel de Allende, and the city’s most famous sight is a towering parish church known as the Parroquia. The Parroquia de San Miguel Arcángel is visible from anywhere in the city. Built in the late 17th century, the church is embellished with intricate pink “wedding cake” pinnacles that soar above the town, giving the appearance of a fairy castle. The pinnacles were designed by self-taught architect and stonemason Zeferino Gutiérrez in the late 19th century. Gutiérrez supposedly learned about architecture by studying postcards of great French cathedrals and then drew diagrams in the dust to explain to his workers what he wanted. The views of the Parroquia from the city center look straight out of a fairytale.

Resident artist Barry Zaid designed this pop-up card for the Biblioteca Public (Public Library) located in the former convent of Santa Ana. The Biblioteca functions as a cultural center for the town and has the second largest English language book collection in Mexico. Sales of the Parroquia cards support the Biblioteca’s programs and scholarships for local Mexican youth.

This is a festive card. The Mexican orange cover says San Miguel de Allende and has a silhouette of the Parroquia flanked by palm trees.

Open the card to a front view of the church in shades of terracotta, pink and green. In front of the Parroquia is a green iron fence with an arched doorway. On either side of the doorway are palm trees and street lamps, with a lively yellow paper banner strung between the lamps. Visitors often use the Parroquia as a point of reference when navigating the city’s winding streets. Take time to gaze at the fairytale castle structure. Notice how the church changes colors throughout the day from the moving sun.

This is a card is guaranteed to bring a smile to anyone who visits or lives in Mexico, especially in SMA. Also for a historian, a writer, an architect, a designer, a bricklayer, a priest, a Catholic, for any happy occasion.

The majestic European style parish that rises in the center of San Miguel de Allende has made this city one of the most important tourist destinations in Mexico and the rest of the world.

The designer was not a famous architect brought from Germany, but a short and chubby bricklayer of humble origin named Zeferino Gutiérrez Muñoz.

The church was initially built in the Spanish style.

Over time the walls began to crack, and Zeferino was asked to change the whole facade. No one imagined that his modifications would be so drastic.

Based on engravings of the Cologne Cathedral in Germany the bricklayer began to build a whole new neo-gothic façade to the Parroquia of San Miguel. He had pink quarry stone extracted from the skirts of the extinct Palo Huérfano volcano, located about 5 kilometers south of town. 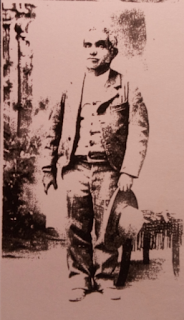 The work began in 1880 and took ten years to complete. Immediately upon completion, detractors criticized the design, saying the vertical lines broke with the style of horizontal lines predominant in town.

Over time people began to accept the design of their new parish. They ended up loving  it.

In 1890 an influential architectural critic named Guillermo García wrote: “It [Parroquia] is 20 meters high and it lacks hundreds of tons to reach the slender ogival, but it is charming in its candor. The Parish of San Miguel symbolizes the talent of our national style.”

Zeferino Gutiérrez Muñoz died on March 23, 1916, during an epidemic of typhus and in the midst of the Mexican Revolution. The church is considered the jewel of the World Heritage site of San Miguel de Allende.