No need to untie the silver ribbon to unfold a box of Ocean Treasures.

As you bend back the flaps an undersea world is revealed, with a scuba diver exploring sharks and shells, jellyfish, squid, coral, and sunken treasure.

This is a unique pop up card, with its own little world. Let us know what you think of this format.

The ocean is a vast body of saltwater that interconnects the earth and covers around 71% of its surface.

The ocean depth is estimated to be around 12,200 feet and is home to around 226,000 known species and an even bigger number of species yet to be discovered.

Despite this, well over 80 percent of the ocean remains unmapped. In fact, humankind has been able to map a bigger percentage of the moon and of planet Mars than it has the ocean right here on earth.

What happens if you find treasure in the ocean? 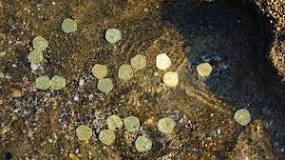 $771 Trillion Worth Of Gold Lies Hidden In The Ocean: Good Luck Getting It

In search of gold? Looking for the next gold rush? The oceans are a good place to look, however, it’s not as easy as panning for gold.

Ocean waters around the world contain about 20 million tons of gold in them. Unfortunately, the concentration lies on the order of parts per trillion, making it extremely difficult to collect.

The amount of gold in the ocean is worth about 41 times the United States gross domestic product (GDP), and almost 10 times the entire world’s domestic product. However, there’s the monumental task of removing the sunken treasure gold from vast amounts of seawater. Each liter of water would contain approximately 13 billionths of a gram of gold.

Currently, there’s no cost-effective method to remove the gold from seawater and be profitable. However, that hasn’t stopped many eager inventors and investors both legitimate and scammers.

Meanwhile, our Ocean Treasures pop up card is an exploration of the diversity of sea life lying beneath the seas.

This card is a fine gift for a birthday or friendship card, for a sailor, diver, marine biologist, oceanographer, explorer, to anyone who loves our planet, nature, the world’s oceans.

See also: Sea Turtle Hatch, You are My Anchor, and La Sirena Mermaid.