Johannes Gutenberg beside his printing press, knee-deep in Bibles, with an illuminated page of the Bible.

Around 1450 a goldsmith named Johannes Gutenberg borrowed money to invent a technology that changed the world of printing. This invention, the world’s first movable type printing press, came to be known as the Gutenberg Printing Press. It created a revolution in the production of books, including the Bible.

Gutenberg’s press democratized knowledge in the sciences, arts, and religion. This invention remained the standard for printing presses until the 20th century.

Inspiration and invention of the printing press

Around the late 1430s, a German man named Johann Gutenberg was quite desperate to find a way to make money. At the time, there was a trend in attaching small mirrors to one’s hat or clothes in order to soak up healing powers when visiting holy places or icons. The mirrors themselves were not significant, but Gutenberg quietly noted how lucrative it was to create mass amounts of a cheap product.

During the 1300s to 1400s, people had developed a very basic form of printing. It involved letters or images cut on blocks of wood. The block would be dipped in ink and then stamped onto paper.

Gutenberg already had previous experience working at a mint, and he realized that if he could use cut blocks within a machine, he could make the printing process a lot faster. Even better, he would be able to reproduce texts in great numbers.

Instead of using wood blocks, Gutenberg used metal instead. This became known as a “movable type machine,” since the metal block letters could be moved around to create new words and sentences.

This card was commissioned by Frank Romano for the Museum of Printing, and was featured on INKISH TV, the info channel for and about the print industry.: https://youtu.be/yut7PdSZqaM

The Gutenberg Printing Press was a hand press, in which ink was rolled over the raised surfaces of movable handset block letters held within a wooden form. The form was then pressed against a sheet of paper. Before this invention books were either copied by hand or printed from engraved wooden blocks, processes that could take months or years to complete. 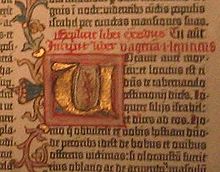